Breaking the Glass Ceiling? The Effect of Board Quotas on Female Labour Market Outcomes in Norway

From SKAIPedia
Jump to navigation Jump to search

Bertrand, Marianne, Sandra E. Black, Sissel Jensen, and Adriana Lleras-Muney. "Breaking the glass ceiling? The effect of board quotas on female labour market outcomes in Norway." The Review of Economic Studies 86, no. 1 (2019): 191-239. | Link

In 2003 Norway revised the Norweigian Company Act to require publicly traded corporate boards to have at least 40% representation of both genders. Firms that did not comply by January 2008 were to be dissolved. Although there was some opportunity to avoid the quota by changing legal form (requirements were for ASA firms i.e. private limited liability companies), many firms complied. The government made a database of women interested in being appointed to boards to reduce search costs for companies seeking qualified candidates.

Understanding the outcomes of this reform is important because the Norwegian approach of using corporate board quotas to promote gender diversity is being adopted elsewhere.

The authors use pre-reform variation in the fraction of women on the boards to identify companies that made bigger or smaller changes due to the reform. The outcomes of interest vary across populations. They look at the change in the gender distribution of corporate boards, the relative qualifications of women on the boards pre and post-reform and the gender earnings gap amongst board members. Beyond the board, they examine earnings for highly qualified women who were not selected for board membership. Finally, they looked at gender gaps in outcomes for early career choices.

The reform increased female representation on corporate boards, with no measurable impact on the quality of female members of the corporate boards. If anything the quality of the female board members increased relative to the pre-reform female board members. The gender gap in earnings within boards fell and women who became board members were more likely to also become one of the top 5 earners at their firms. However, there is no evidence that board quotas had positive effects for the rest of the women in the corporate sector, who were not appointed to corporate boards. There is some evidence that the reform increased the expectations of positive career outcomes for business students, but that did not appear to affect decisions, either with respect to the likelihood of women majoring in business or expectation of modifying family plans for those in the business major. 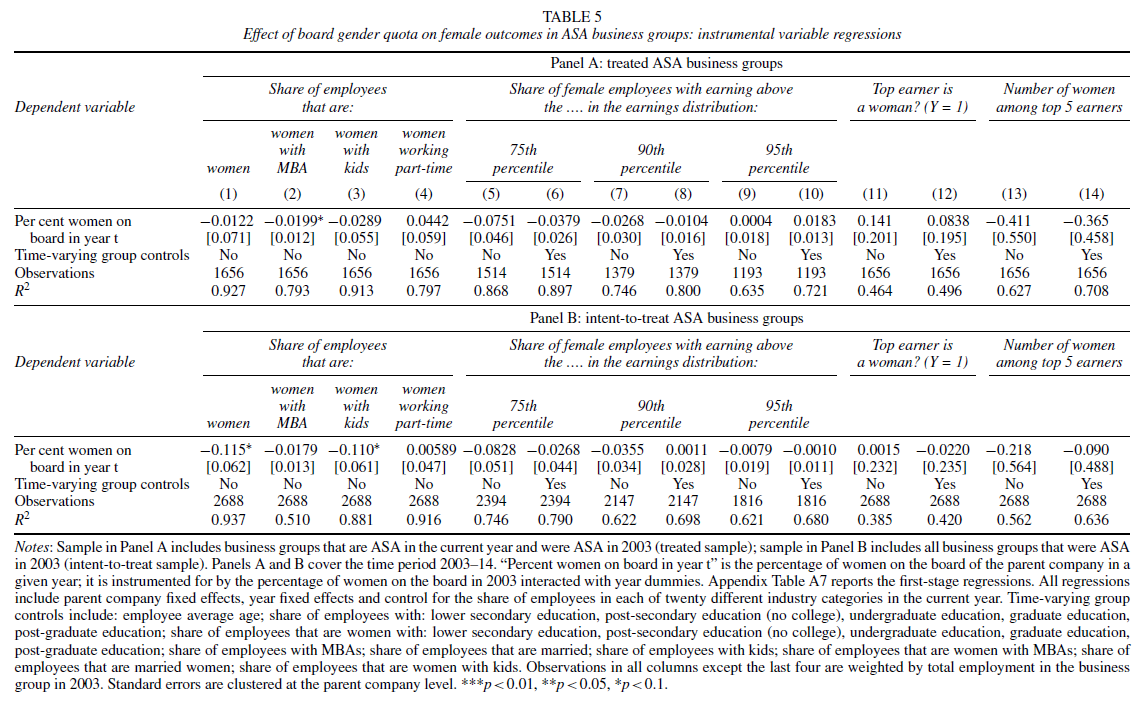